My Story His Faithfulness

“Release” first brings up images of The Giver where it was a synonym for death or more specifically euthanasia. It is hard for me to get over that image. I’ve tried to come up with another word that could mean the same thing, but I’m coming up blank. It does feel mildly appropriate in that I have had to watch the death of hopes and dreams for what could have been. There was death involved, but it is death that is bringing new life. 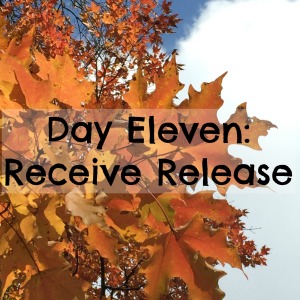 I can pinpoint certain moments. Some happened while I was running. One happened in the counselor’s office. Many happened through the tears.

What I had been doing was suppressing emotions and memories. I was trying not to remember and hoped everything would just go away. It didn’t work. Over the last several months, I’ve been able to release many of those emotions and process the memories.

I’ve let go of a lot of things that just weren’t helpful anymore. I have a tendency to carry stress physically…in my shoulders, my back, my neck. I’ve been amazed at how relaxed I have been over the last weeks and months. I’ve needed to grieve the death of certain dreams and hopes, but I am so thankful I’ve been able to release much of the past and make room for new dreams in the future.

(You can find the entire series here)